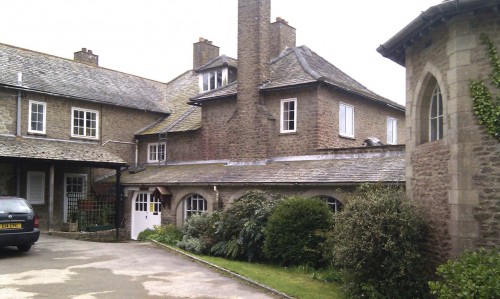 There are leaping dolphins at Othona, and butterflies flying to the moon, too. These are wall decorations at a place by the sea near Bridport which is home to a community ‘rooted in a Christian heritage, open to a widening future’. They have been running the house as a retreat centre since 1965, after the community was founded at a centre in Essex. I stayed for a day’s ‘natural voice’ singing and an ‘open weekend’ of walks, talks and homemade food. And all for around £130.

The previous owners of the building were a group of contemplatives known locally as ‘the white ladies.’ They did much of the building work. There is a simple stone chapel, basic rooms and more basic bathrooms, a well-stocked library, biodiverse gardens, and fine walking down to the sea below.

Why do people make the journey and what do people find here? The sound of the sea and views of the blue horizon from way past Lyme to back towards Portland Bill. A welcoming group of permanent residents sonorously named ‘the Core’ who keep the place running with a team of shorter term helpers who cook, clean and garden. Home grown food, birdsong and quiet contemplation.

Reasons for being here seem to be varied. One of our teachers was a former monk and resident, at least two others have been part of some kind of religious community. One runs a Vanier l’Arche community in London, caring for adults with learning disabilities. A hard-pressed teacher had been visiting with her family for years. A recently widowed lady had been longing for a return visit. There were crafts people and landscape gardener, a wildlife teacher, a web designer and a young American Baha'i on a break from her theological studies. Typical weekend visitor: a woman in her 30s to 60s. A more disparate group joined us to sing barbershop tags, spirituals and more. Several defined themselves as pagan or ‘post-Christian’ and there was a turquoise-clad sufi who whirled as we sang a dhikr from her tradition.

Visitors are allocated tasks including preparing vegetables and cleaning their rooms. A bell is rung for meetings in the chapel where the day is formally begun and ended.

The library holds titles on radical religion, Rumi and chicken soup, works by Chatwin, Maupin, Spong, Dawkins and Dave Andrews, and a copy of Iris Murdoch’s ‘The nice and the good’, which makes much of a disparate people living together in disharmony.

So what is there of Murdoch’s ‘good’ at Othona? Certainly a quiet and unpretentious warmth and acceptance for all kinds of diversity. A lot of laughter. A searching in many directions, from Enneagrams to mindfulness via TS Elliot and country walks. A warm and restful simplicity, away from the usual pressures including  all the buzzing media that seem so essential but that waste so much time.

I dreamt of St Paul and went on a circular walk to the lovely warm sandstone church at Burton Bradstock where I was coaxed into the middle of Sunday service by the hymn ‘Lord of the dance’. The sermon, delivered in a gentle Dorset burr by a long-term incumbent on first name terms with all but one of his tiny congregation, quoted the uncompromising apostle and his injunctions to read scripture.

Back along the coast for roast lunch and and fossils and a river walk in Lyme Regis. In the evening a ‘One World Worship’ led by a Christian Aid trustee with a gift for primary school stye discussions on Ghandi, Aids and  assorted religious texts.

I left Othona after a quiet morning reading with another trip to the sea where I found pebbles embedded with tiny fossils.

Outside Winterbourne Abbas I picked wild garlic in a wood where a straggle-haired local directed me to a well-tended 4,000 year old stone circle that is he said connected with mysterious religious ritual: ‘they’re on a ley line and are supposed to be growing, but I’ve not seen it yet!’ 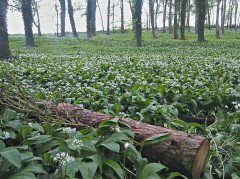 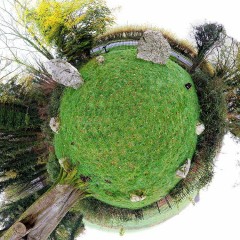 I resisted the temptations of Athelhampton and Kingston Lacy on the way home, but was most tempted by a garden opening at Charborough Park, home since Elizabethan times of the impressively named Plunkett-Ernle-Erle-Draxes. The estate boasts what is claimed to be one of the longest brick walls in England.