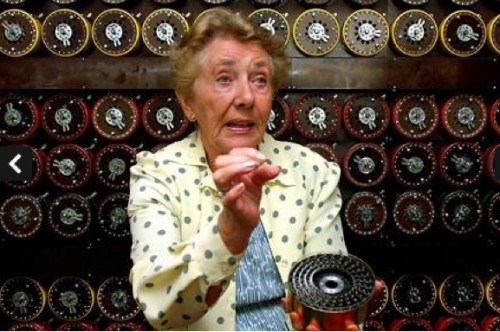 Jean Valentine was born in Scotland  in 1924. She was an only child, and like many of her contemporaries, she left school early, not considering university, but buzzing with the excitement of all the wartime activity around her. Aged 18 she decided it was time join the war effort. At a recruiting centre in Carnoustie she was asked to sit an intelligence test and to list her interests. Her results and a passion for crosswords led an interview board to ask her to stand at full height. At just 4'6" she is scarcely tall. In spite of this she was told that she was soon to board an express train for London: 'we don't know what you are going to be doing but we are told to look out for people like you.'

That journey marked a new beginning for the inxperienced Scots girl from Perth. She didn't know it then, but with the help of a special stool that enabled her to reach as high as everyone else she was to work on the famous enigma-decoding Bombe machine, specified by Alan Turing within a few weeks of his arrival at Bletchely.

She joined a team of 10,000 at the Government's code-breaking centre at Bletchley Park – a place so secret that its vital role in shortening the entire war by perhaps two years did not became apparent until 1975.

At a conference on 'Turing's Worlds' held in Oxford on the 100th anniversary of his birth, I heard Jean Valentine described her war work with quiet modesty and no little wit.

When she first got to the capital she heard Churchill speak before being sent with four others to Eastcote in Middlesex. Her superiors were looking for linguists, mathematicians, chess players and crossworders.

Jean worked with around 11 others on 8 hour shifts with just one half hour break. Like her colleagues, she had no idea what was going on in the nearby huts. When she mixed with people from other huts the conversation was always superficial.

On each of 200 Bombe machines 148 revolving cylinders clicked and whirred their way for 24 hours each day through 158 million million million combinations until a decoded result was ready for translation.

You can hear the apparently bomb-like sound of the machine here:

The results of each session were telephoned through to another hut for translation. Only after the war did Jean discover this hut was just across the path from the hut where she worked every day.

In just a few years at Bletchley, Jean rose to become a leading Wren. As a Bombe trainer she was paid over a pound a week, visiting the factory in Letchworth where the majority of the electro-mechanical machines were located and where they were made. Unsurprisingly, morale was low on the production line for the intricate machines. Jean was tasked with raising the spirits of the workers by giving them a sense of the importance of what they were doing.

After several years at Bletchley, Jean Valentine unexpectedly obtained her father's consent for her despatch to Ceylon for more war work. He gave it in a letter addressed 'to whom it may concern'. The cramped trip through U-boat bobbing seas was exhaustingly long and carefully circuitous. Jean decided she'd never travel by P&O again. In Ceylon she was to meet her future husband, only marrying this almost complete unknown after receiving another carefully worded 'to whom it may concern' letter from her father.

With a smattering of Japanese and of their version of Morse code she worked painstakingly, decrypting Japanese weather reports.

My role was to drive Jean to the Oxford event. Her sharp mind was immediately apparent, as was her clear-headed sense of purpose. Asked recently by the Queen how the vital work at Bletchley was kept secret for so long, her answer was suitably to the point: 'discipline!'.

After the war Jean Valentine enjoyed a rather different career as a psycho-sexual counsellor, before retiring to Henley to live in community with luminaries including the famous benefactor Dame Steve Shirley who is said to have given away most of her £150m fortune.

Jean Valentine is an altogether remarkable woman whom it was a privilege to meet.

Jean Valentine never met Alan Turing, but other speakers at the event in Oxford provided insights into the character of the computer pioneer.

Biographer Andrew Hodges places Turing in the context of the political and sexual world that existed around him. He described how Turing broke boundaries whilst championing the essential role of collective endeavour. Turing was however less than modest in only crediting the US with code-breaking 'donkey work'. Turing was a contradictory man, capable of being both self-effacing and arrogant at same time: 'modern in the sense that he was morally ambiguous and awkward'.

Frustratingly for a biographer, Turing was also an unreliable narrator. Towards the very end of his short life he wrote to Norman Routledge, a young gay maths student at Cambridge. The letter described the 'hard thinking' of his war work but wrongly said it involved no travel. In fact Turing travelled to Germany, the US and France. This letter was written at a critical moment, soon after his arrest and the removal of GCHQ security clearance. Little wonder perhaps that it described the work at Bletchley Park as 'a racket'.

In the letter Turing commented on his arrest after he had acknowledged having an illegal sexual relationship with a nineteen year old who subsequently broke into his house:

Hodges commented that the biographer's role is simply to let this syllogistic statement stand.
How was he to know what his subject thought? Turing remains a mystery, but his legacy might be summarised as a combination of simplicity, interdisciplinarity and collegiality.

Like Turing's relatives, Hodges maintains that Turing did not take his own life by deliberately eating an arsenic poisoned apple, as is usually supposed.