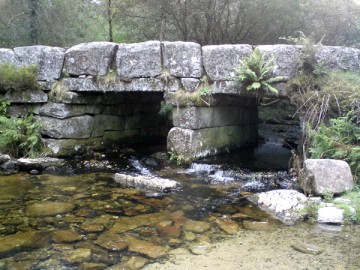 The three of us are walking on Dartmoor on a dull day in early September. We climb up from Burrator Reservoir, with its moss covered boulders and lichen covered trees, to a spot high on the bare moor where we picnic beside Crazy Well Pool.

The local legend says that the icy water is bottomless and that an attempt to plumb it once caused the loss of not only all the bell ropes of the local church (they had had been knotted together) but also of the church bell.

Edward II's favourite Piers Gaveston is said to have concealed himself there: "Where lags the witch? / she willed me wait / Beside this mere at daybreak hour, / When mingling in the distance safe/ The forms of cloud and tor. She comes not yet; tis a wild place - / The turf is dank, the air is cold; / Sweeter I ween on kingly dais, / To kiss the circling gold;" (from a 19th century poem by the Revd John Johns). They also say that early in the 20th century a young soldier drowned in the Pool and that it whispers the name of the next person from the parish to die. No wonder that under a grey sky, the water looks uninviting, almost viscous, only faintly rippled by a strongish breeze.

One of us remembers other times on Dartmoor. He’d taken countless parties of schoolchildren on this exact route. Once they'd been stalked for an hour or more by squaddies, playing a stealthy game of peekaboo behind the trees, always just out of sight behind them, until they’d revealed themselves at this very spot.

Beyond the lake we walk along a fast running leat (or stream). The map shows it improbably following the hill's contour lines. This is part of a scheme started by Sir Francis Drake to provide Plymouth with drinking water. Channelled and embanked, the leat rushes down to an aquaduct before the water is directed through a pine wood to feed the reservoir in the flooded valley below.

The walk back breaks away from the stream and follows a roughly paved track through forest. There is a clearing where the River Meavy races over granite and limestone boulders beneath the ancient Leather Tor Bridge. Two massive slabs of granite form the bridge’s central pier, and like other clapper bridges, the whole structure is held together by its own weight. Roughly shaped boulders, some now locked together with iron staples, make a parapet. Where once there was a ford, there is a wide expanse of shallow water beside the bridge.

As the afternoon light fades, the ex-teacher sits and remembers his last time at the bridge. Listening to the water rushing and gurgling, wrapping itself round the stones, it is almost as if he hears the children’s voices again. High cries as the kids dash across the bridge and down to sandy spot ideal for paddling. They’d been told not to go in the water – and of course they had. For the briefest of moments, the early evening’s uncertain light is transformed into bright sunshine, a dozen or more children seem to climb excitedly over the old stones of the bridge, calling to their friends in the water below.

In a draw somewhere, other photos record the scene: the children happily playing and the staff, freed of their charges, chatting in the sunshine. But now there is a faint chill in the air, and it is time to drive home.