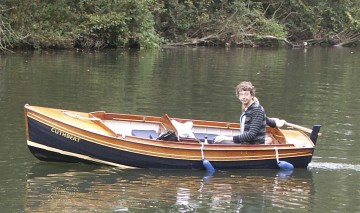 The Thames at night. Dark outlines of tall trees on the bank side. It is a magical summer evening. In the moonlight, the engine of the little boat putt-putts gently, its prow pushing through a layer of eerily beautiful river mist that rests on the water, but does not obscure our view ahead. We are on our way home after a good pub dinner. On the walk back to the boat we passed Shiplake church, where tiny glow-worms shone brightly in the darkness. We met a retired schoolmaster who was conducting a glow-worm census. He described the few weeks when the females "recline as if on a deck-chair" in the long grass, illuminating their tails in the hope of attracting a mate.

For 12 years I've had a share in a wooden boat, chosen in the yard at Peter Freebody's where the consummate salesman told his daughter 'these two nice young men are deciding which of these two lovely boats they are going to buy'. We named him Cuthbert, not after the Lindisfarne saint called the "wonder-worker of England" but because the name jumped out of a list at random. Just 13' long, built by Freebody's in the fifties. An inboard 1.5hp Stuart Turner R3M engine, made in Henley like the thousands ordered by Butlins for their hire boats, with glamorous teak Riva decking and a dark blue hull set off with a line of fine gold.

Cuthbert always turns heads, often in admiration, but sometimes in sympathy, since the Stuart Turner has a reputation for cantankerousness. Before shelling out for a professional re-build we even attempted an engine overhaul ourselves, hand-cutting seals, and cleaning out decades of gunk, referring to the original manual with its alarmingly complex diagrams and wonderfully mysterious line 'a spare jet is always a convenience'. From being a complete novice I have been initiated into the frequently infuriating idiosyncracies of Stuart Turner engines. We have uncovered a world of specialist experts, beavering away in their intriguing workshops: engine restorers, cover cutters, tiller turners and master boat-builders for whom 20 coats of varnish is the norm.

The adventures we've had! Admittedly most because the engine failed, or we set out too late on a trip that took longer than expected, or because we simply forgot to put petrol in. The locks we've worked by hand late at night, the weirs we've drifted perilously close to and the money we've spent! Trips to the regatta, hanging on to the boom in mid-river as fireworks exploded all around us, the water a mass of dazzling reflections. The rudder we somehow lost in a lock. I was bereft. I even contemplated sending down a diver, but someone was found who could make a replacement, even better than the original. Twice vandals loosed Cuthbert from his mooring, scattering cushions (we found them being looked after by a bemused swan) and leaving him drifting. He (or was it she? - I could never decide, as boats are always female) was even in a car accident, after his trailer bearing failed. 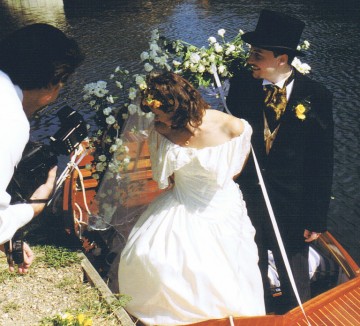 A complete professional re-build of the entire engine, extensive work on the hull, much re-painting and re-fettling inside and out. Family picnics and late-night trystings, an epic journey to the tidal Thames, and even a wedding, when the newly married couple travelled to their reception beneath a flower-bedecked bower. A Sun-trained photographer bawled 'over here darling!' as the bride boarded. Toffs on gin-palaces toasted them in champagne and swimming boys spontaneously roared their approval.

At least three relationships bloomed because of trips on Cuthbert. Two friends were introduced to each other and taken out for evening trips on Cuthbert several times before one of them shyly confessed 'we thought we might go out together - only without you, this time, I hope you don't mind!'.

But now, after all the excitement, the traumas and the adventures, we are finally selling.

On our last trip I caught sight of a sudden flash of brilliant blue. I watched as a kingfisher dipped and rose through the air just ahead of us, leading us back to the mooring and to four lives without one very special boat called Cuthbert.