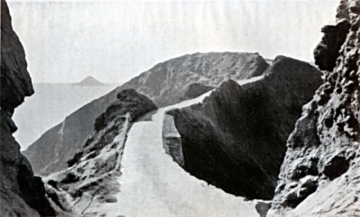 OUT OF THE CHAOS OF MY DOUBT

Out of the chaos of my doubt
And the chaos of my art
I turn to you inevitably
As the needle to the pole
Turns . . . as the cold brain to the soul
Turns in its uncertainty;

So I turn and long for you;
So I long for you, and turn
To the love that through my chaos
Burns a truth,
And lights my path.

This was read today on Radio 4's 'Poetry Please'. The poem is simple, direct and beautifully constructed. Peake was a polymath who deserves to be celebrated for more than just his marvellous Gormenghast, which made such a successful BBC adaptation in 2000, featuring the enjoyably pouting Jonathan Rhys Meyers.

Gormenghast was written on the tiny island of Sark, in the Channel Islands, and Mr Pye was inspired by it. Derek Jacobi made a very memorable Mr Pye for Channel 4 in 1986. Visiting Sark, I could see him (or was it Peake himself?) crossing the 9' wide isthmus, called La Coupée, which divides Little and Greater Sark.

The Coupée leads to a view of Brecqhou island where the secretive Barclay twins, proprietors of the Daily Telegraph, have built a mock gothic castle. Visits are not possible. There was a warmer welcome on Lihou, an islet connected to Guernsey by a causeway, where we were met by Mr and Mrs Borwick of the baking powder family.

I love being on islands, worlds in miniature, surrounded by the enticing, all-encompassing sea. Perhaps it's the sea air, or the sense of isolation?  Even the most inconsequential experience is somehow heightened on an island. Smaller islands that lie hidden beyond others have an even more secret appeal.

Off Croatia lies the island of Mljet, which means honey, because the Ancient Greeks found so many bees there. According to Homer, Odysseus escaped shipwreck and stayed for seven years with the beautiful nymph Calypso. St Paul is said to have preached on the island, after being shipwrecked not in Malta but here. We walked the green hillsides of the national park, and canoed and swam naked in the gorgeous turquoise water. A narrow coastal inlet leads to a miniature inland sea, with the former Benedctine monastery of St Mary on an island in the middle of it.

I will never forget a trip to the monastery on Iona to see John Smith's grave. You reach it by crossing from Mull. Ancient celtic crosses face it out to the Atlantic, and in the graveyard the carved faces of chieftains blur into the stone. This is where, in around 800, monks made the Book of Kells, that masterpiece of calligraphy and illumination now in Trinity College, Dublin. The intricate decoration twists and turns in on itself, all powerful rhythms and fierce insularity.