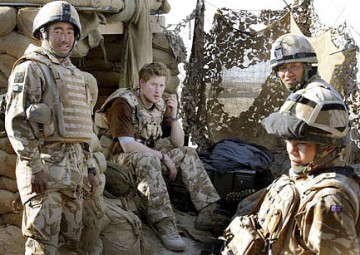 The Daily Mail, like most of its stablemates, is gripped by another bout of Harry fever. The revelation that the carrot-top royal is soon to be an ex-air traffic controller in Afghanistan is accompanied by acres of perfectly posed photos of the pin-up prince on patrol with the Ghurkas. Tragic that for him it's "a dream come true" to take part in a ghastly conflict in a country that's been wrecked by a poisonous cocktail of religious extremism mixed up with centuries of outside interference.

What's more Harry hasn't "really had a shower for four days, haven't washed my clothes for a week and everything seems completely normal." The prospect of slightly whiffy Prince who has only had unreal showers lately doesn't entirely do it for me. Our obsession with endlessly rubber-necking young royals and now with their bathing habits strikes me as daft and intrusive.

The other day I was at a concert where I sat next to a young soldier the day after he got back from active duty in Iraq. After talking to him, and seeing him twitchy and alert to attack even in a concert hall in an English village, I have huge admiration for any young person brave enough to put their life on the line for their country.