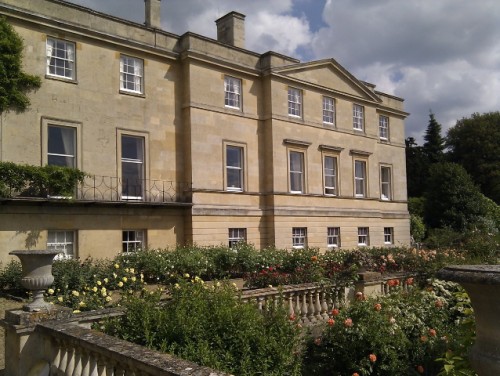 This is Nuneham Park, the work of the enjoyably-named architect Stiff Leadbetter. The house has an additional wing by Smirke and decorations by 'Athenian' Stuart. Leadbetter was also responsible for Newton Park near Bath, as well as Taplow Court in Bucks, the UK headquarters of the Japanese lay-Buddhist order, SGI-International.

The first Earl Harcourt, who was a favourite of George III, had Stuart build his 'temple' after finding the medieval church inconveniently marred the view of the pleasure grounds he commissioned from William Mason (and that were inevitably later elaborated by Capability Brown). He also destroyed the churchyard. The then rector complained of the site of the churchyard: 'He mows and rolls it at his pleasure'. The Earl also found the village of Nuneham Courtney inconvenient, so he demolished it and re-located it in what were undoubtedly better houses on the main Oxford Road.
But the new grounds were good. Painted by a young Turner, they were admired by monarchs including Victoria, and used by Dodgson as a setting for Alice's adventures. 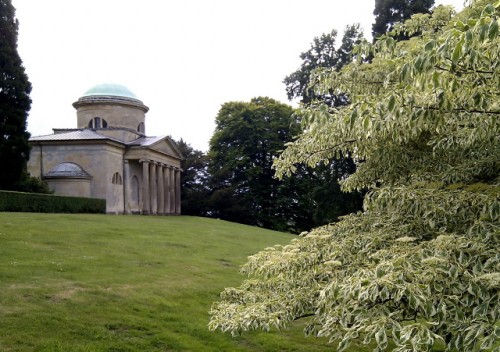 The Chapel is also very much in the best possible taste, with all manner of Italianate fitments including a statue of a pretty curtesying girl and a piteous monument to the first son of a later Earl, who is carved naturalistically as if in sleep, clutching pristine flowers forever. The chapel also contains funerary wreaths for Edward VII, some carpet left over from his funeral service, and any amount of baroque candle-powered lighting equipment, since the place became redundant long ago and was never connected to the electric supply. 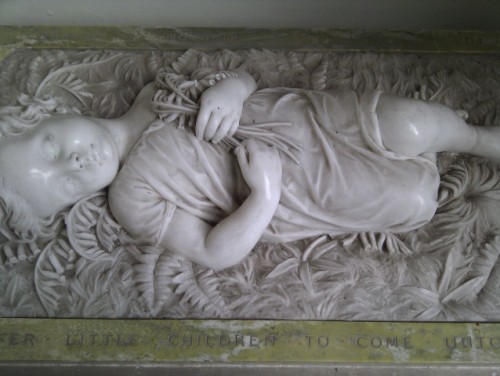 Earl Harcourt himself is not I think commemorated here, but was buried at Stanton Harcourt. The Estate he took so much pleasure in re-modelling claimed him in the end, since he drowned in a well there, after he attempted to rescue a favourite dog which had somehow fallen in.

Just once a year there is a service in the chapel. This year it coincided with a national church music festival. Gibbons and Tallis and the choir of Dorchester Abbey provided the music. Sounds from long before the chapel took shape spilled out past the white plastic congregational seating and into the clear blue afternoon where the land falls away to the Thames and the English landscape seems to roll on forever. 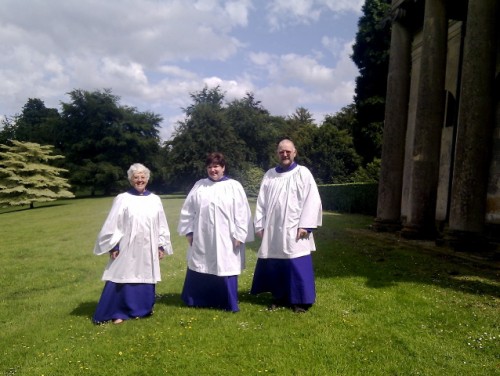 Afterwards we were entertained to tea in the house. I'd been promised vegetable samosas, but very happily ate miniature curved poppadums and scones and jam. Seated on elegant chairs on thick carpet and surrounded by immaculate gilt and plasterwork, the scent of the rose garden wafting in to us, we were served by white-clad, clear-eyed volunteers from the Brahma Kumaris, a worldwide 'spiritual university' which has made Nuneham Park its global retreat centre.

This new religious system was founded in 1936 by a diamond dealer from what became Pakistan. Brahma Kumari means 'daughters of Brahma' and women make up most of the leadership of the movement. Rising before 4am to meditate open-eyed, followers are sexually abstinent strict vegetarians (who according to some) believe the world will end in 2036 (They revised the date when one they had chosen earlier passed uneventfully). Their meditation system is based on the 2nd cent. BC treatise of Patanjali, which also inspired Transcendental Meditation and your local yoga evening class.

The 'Murli' is a collection of what are thought of as spiritual revelations, providing guidance on avoiding the unenlightened (including family and friends) and the cinema. I spoke to a Liverpudlian follower who had a quietly intense passion for the 'concentration' achieved through meditation by the leaders of the movement.

A website for 'exiting' Brahma Kumaris denounces the movement for its practice of taking money from followers. Since the world is soon to end, you don't need dosh, and had better store up credit for the life to come instead. Suicides of former followers are discussed together with the Brahma Kumari habit of taking money from young girls as dowry, so that they are not 'dumped' on the order.

As I drove back down the long drive to the new village of Nuneham Courtney, I passed a long line of sari-wearing Indian girls and their mothers. Full of tea and scones and the beauty of Nuneham Park I smiled broadly. None smiled back, and they seemed uncomfortable and apprehensive.

A major free musical event next Saturday provides another opportunity to view the Park and to find out more about the Brahma Kumaris.