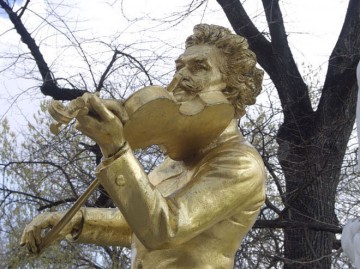 “If you start to take Vienna - take Vienna” said Napoleon. A tall order for the art-lover with just four days in which to attempt to do justice to the major sites. The Kunsthistorisches, the Albertina, the Belvedere, the Imperial Library, the Ephesus and the Musical Instrument collections, the Hofburg, the Schönbrunn. The Cathedral, the Karlskirche or the Peterskirche? Canova, Dürer, Caravaggio or Vermeer? Baroque or Secession?

All the booty of empire gathered within the 4km ring, lined with palaces cascading with statuesque caryatids and writhing atlantes. Churches with walls coated with plaster angels forever tumbling into the inferno. A Haydn, Mozart, Beethoven or Strauss commemoration on every corner. And the cakes! 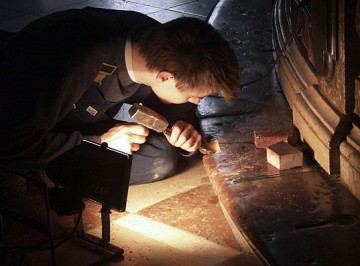 Vienna oozes history and its unconcerned citizens embody a favourite word of Queen Victoria's. They and their city are 'Gemütlichkeit' - contentedly belonging, polite and unhurried. On the plane a Viennese offered tips on getting the best from his home town. In the Graben, the city's busiest shopping street, half a dozen people stopped and waited while I pointed my camera up at a building across the street. At junctions cars halt and pedestrains are waved across. Gentlemen of a certain age wear hats. Their ladies are impeccably (and somewhat conservatively) dressed. Even the frock-coated touts for Strauss concerts are polite in their salesmanship. 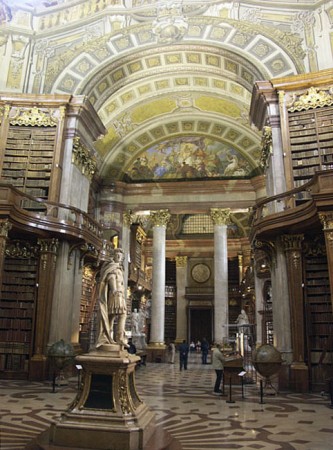 We marvelled at the Prunksaal of the Imperial Library with its ravishing ceiling decorations and perfect proportions, justifying the claim that it is the finest library hall in Europe.

Mohr in Hemd (chocolate pudding) or Kokosbusserln (Coconut Kisses)? The cakes are as elegantly refined as the Viennese. We ate Sacher torte in a relaxed and splendidly old-fashioned café by the rear entrance of the Hofburg Palace. A Secession facade there so offended the emperor with its 'plainness' that he reputedly never passed it again.

We resisted other temptations including the discrete entrance of the exotically Turkish Centralbad which was a haunt of the Archduke Ludwig Victor, a brother of the emperor Franz Josef I, who 'was famous for his love for beauty'.

We admired Canova's tomb for Maria Christina at the Augustinerkirche. It was such a success that Canova himself was buried in a copy in the Frari in Venice. In the Kunsthistorisches we ate more cake and lost hours in the galleries. Not one but three Rembrandt self-portraits. Exquisite Roman cameos and gold jewellery quite unlike anything I had ever seen.

An incredibly myopic Jehovah's Witness seemed to be stalking us in the clock museum. All three floors are choc-a-bloc with chiming timepieces. He was a museum warden and seems to spend his days reading scripture, held at about 2" from his nose. In the museum of musical instruments (rooms of shawms, serpents and Beethoven and Chopin's pianos) another warden was nervously writing who knows what never to be published masterpiece on scraps he carried round with him.

Austrian Art Nouveau toyed with plainness but finally embraced ornament with relish. We admired Otto Wagner's Majolica House which is a riot of coloured tiles and ornamental balconies. The secession building has a glorious gilded dome of glittering laurel leaves. More pictures here.