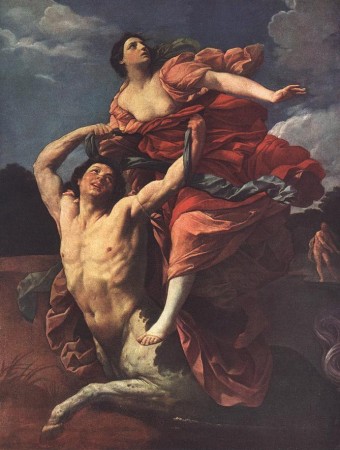 A report in Pravda (of all reliable sources) says that centaurs were real. Researchers decided this because of the number of cave paintings depicting the chimeric creatures. The article states, in a somewhat old-fashioned translation, that:

"Historical sources reveal that buggery was very popular among ancient Greeks and Romans. A legend says that Greek scholar Thales recommended his master Periandr not to engage unmarried shepherds nor to produce more centaurs." 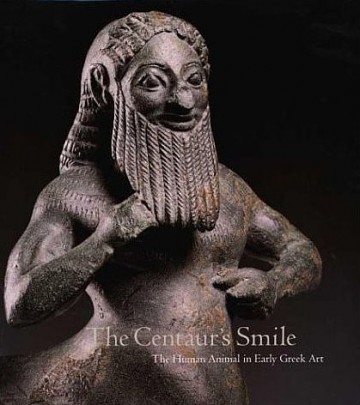 That interpretation may not convince, but there is no denying the creatures' pervasiveness. For 3,000 years or more the half-man, half-horse has been lodged in the collective consciousness, inspiring myth-making and art, standing both for animal passion and for the genial guardianship of knowledge.

The Centaur's Smile: The Human Animal in Early Greek Art  is the catalogue of a 2004 Princeton exhibition which charted examples from as early as 750BC. In Pindar's poem, the kindly centaur Chiron 'smiles greenly' (as if with secret knowledge) at Apollo when he seeks advice on seduction techniques.

Guido Reni (whose 'Rape of Dejanira' is above) is one of countless gay artists since who have been fascinated by beastly half men.

Bruce Rogers' beautiful typeface Centaur was first used in 1915 for an edition of de Guérin’s prose poem Le Centaure. The font was later issued in a commercial version developed by Rogers and the Monotype Corporation. In de Guérin's sensuous story, the aged centaur Chiron describes his early days to a young mortal who seeks him out on a mountain top. 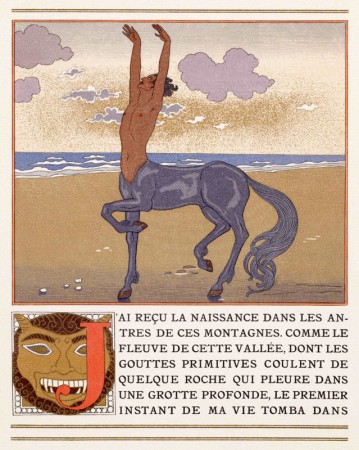 Other interesting editions of the de Guérin story include one printed by Ricketts and Shannon at the Vale Press in 1899 and this art deco interpretation featuring a distinctly un-menacing centaur by George Barbier (1928). Ricketts returned again and again to the centaur theme. In 1902 the artist and his long time collaborator Shannon were the models for a small painting of Nessus and his stolen bride Dejanira in which:

"This bold defense of Nessus’ “rape” portrayed a willing Dejanira with strong shoulders, arms, and calves."*

Evidence that centaurs still hold a considerable homoerotic charge is provided by the recent phenomenon of 'boytaurs'. They are celebrated in a somewhat indecent website featuring 'Online resources for boytaurs, multilimbers, shapeshifters, and their friends'.

One lexicon defines a modern day centaur as "A gay man who lives openly in a predominantly heterosexual suburb." 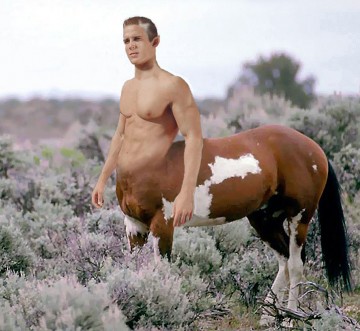