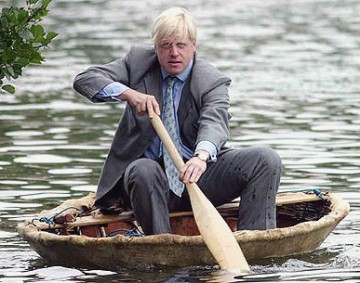 There's much chortling that around a quarter of London's electorate decided to make 'bumbler' Boris their Mayor on St Boris's Day. But how has the blonde bombshell served his Henley constituents and what will they do without him?

In the Bulgarian Orthodox church at least, the anniversary of the death in 907 of St Boris is remembered. He was notable for his serenity, aside from a lapse in which he blinded his son to stop him turning to paganism. 'Serene' is not the word to describe Boris Johnson MP in Henley-on-Thames. Scarcely an issue of the local paper has been complete without two or even three photos of Boris pressing the local flesh. Opening this or standing against the closing of that, Boris has been there, even during the Mayoral campaign.

He responded twice to our lobbying on local causes. Once a local hotelier 'laid on a crayfish lunch' to woo him to our presentation of the need for a new bridge across the Thames between Reading and Henley. He watched our video of the 45min queue of standing traffic snaking round narrow village lanes, ate the crayfish sandwiches, and pronounced (fresh from his trip to a local marina) that the best answer to the problem of 13,000 vehicle movements a day choking a tiny village was to set up a ferry to carry passengers across the river.

This entertaining tendency to make it up on the hoof (remember his disastrous gaffes in Liverpool and elsewhere) conceals Boris's steely determination. At the post-electoral celebrations his sister commented that Boris has always got what he wanted.

Each time we met him Boris was surrounded by a group of local party faithful. Once or twice I caught them raising their eyebrows - 'Boris will be Boris' was the story. First Hezza represented us (another MP notable for his beazer), then Boris. So who will be next? Perhaps his father Stanley, who confirmed:

"Put it this way, I'm still on the candidates' list. Obviously it would be up to the Henley association as to whether they invite me for interview, but I don't see why I shouldn't put in for it."

He certainly has the requisite distinctive hairstyle.

The the nu-Labour project is on its last legs and Londoners have registered their protest at Gordon Brown's lack of personality. It remains to be seen if (in spite of his goodwill and determination) Boris really will be enough to reduce the death rate of young black men in the capital.