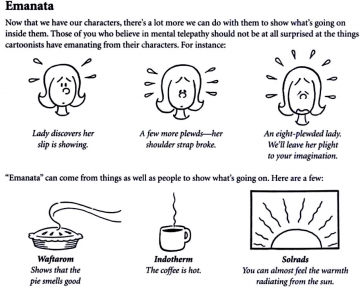 Don't know a grawlix from a plewd or an agitron from an indotherm? Finding words for the marks made by cartoonists is a funny business. A jokey article about the marks cartoonists make for things like movement, emotion and radiation is now the stuff of earnest research into the visual language of cartoons.

It seems to have started with American cartoonist Mort Walker who wrote a satirical article in 1964 called "Let's Get Down to Grawlixes," for the National Cartoonists Society. In 1980 he expanded it to a book The lexicon of comicana. In Mort Walker's Private Scrapbook he writes:

'I spoofed the tricks cartoonists used, like dust clouds when characters are running or lightbulbs over their heads when they get an idea... I spent many hours at the museum recording their "language". I created pseudoscientific names for each cartoon cliché, like the sweat marks cartoon characters radiate. I called them "plewds" after the God of rain "Joe Pluvius".'

The spoof didn't quite work (even though the words he invented are very funny), because people really wanted words for the marks cartoonists make. So here is a run-down, from Wikipedia: 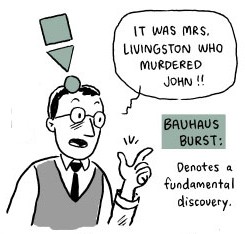 It's funny in a Sellars & Yeatman kind of way (something else that deserves to be better known). Dash Shaw responded to the comic challenge with a great cartoon strip using the symbols and The Balloonist drew a booklet for cartoonists using some new symbols. Needless to say, the academically minded take it all very seriously. Neil Cohn just about gets the point. But only just:

'He also attaches a myriad of useless names to them, to the extant that you feel that his whole point for jargon is to be facetious (which it may well have been).'

See also an explanation of Kirby Dots (developed by Jack Kirby to show an energy explosion) and a site devoted to cataloguing onomatopoeia like 'kaboom' (apparently first used in The incredible hulk, vol 1, no. 229, 1978).