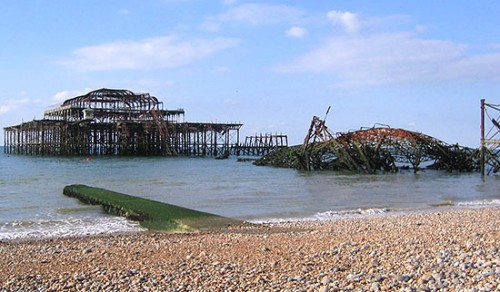 The designers of the London Eye, architects Marks & Barfield, are confident that their upwardly mobile replacement for the wrecked West Pier will be open by 2011. Work has already begun on the i360 project which has already been dubbed an 'iSore' by its critics. It will consist of a 100-person fibreglass pod which will gently rise up a 144 yard tall steel cylinder, giving unmatched views of the city, sea and downs.

Marks & Barfield place their design in the tradition of other south coast examples of pioneering architecture (presumably such as the modernist De La Warr Pavilion). The seaside attraction will be topped by wind turbines which will provide some of the power needed to operate it. The West Pier Trust still hopes it will eventually rebuild the elegant pier which was the star of Ken Russell's 'Oh what a lovely war!' as well as featuring in several of the 'Carry On' films.