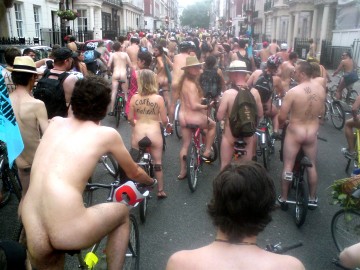 What else to do on a balmy Saturday afternoon but cycle stitchless for six miles in central London as one of the thousands of cyclists that took part in London's fourth ever World Naked Bike Ride?

Campaigning for a better deal for cyclists, against the global grip of polluting oil and for something called 'body freedom' the ride's slogan was 'go as bare as you dare'. Stripping in Hyde Park on a humid afternoon among lots of other already naked people was actually quite easy. A kind of party atmosphere, with lots of 'nice' chat of the kind you have in Waitrose supermarket on a Saturday afternoon. Riders of all ages and races, but more men than women, some body painted, others in wigs and quite a few with slogans painted on them. 'Carbon natural', 'Less gas more ass', several angels' wings, skaters, recumbent cyclists, rickshaws and at least one unicycle. 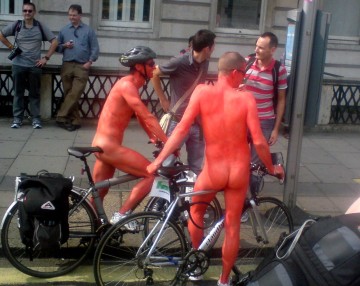 Bikes festooned with greenery ridden by very green men, two red men and even one fluorescent. Full-on exhibitionists wearing beads and blowing whistles, environmentalists, topless housewives and even some bashful families; whistles and horns and bells and on every street lines of amused and bemused onlookers: delighted smiles from people on buses and everybody taking photos. Vulnerability and strength, part of a group together doing something out of the ordinary.

A great roar in Picadilly Circus, much easy chatting on the way, (and bizarrely no saddle soreness), a surreal feeling riding past the cenotaph in Whitehall and the unexpected comedy of seeing a naked cyclist use a cashpoint. There was an ineffable daftness about it that just made me want to grin and grin.

Riding back under the Wellington Arch there was another great cheer, cycles waved in the air in triumph and a desperate need for a nice cup of tea.