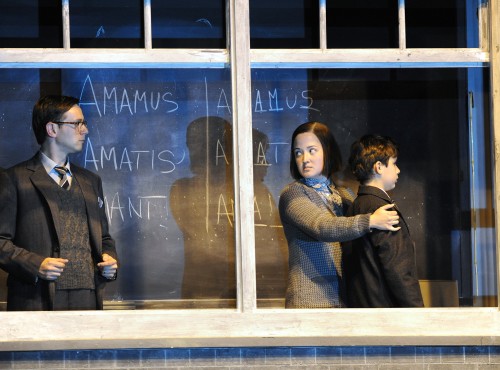 Take one familiar Shakespeare play made up of mortals, immortals and a gang of rude theatricals. Turn into a popular opera in which half the play is gone, the fairies are all boys and the big story is Tytania’s mistaken love for an ass. Spice up in a new version set in a grey state school where Oberon wants to have his way with the boy, jealous Puck sulkily observes his own dream and all the fairies wear sun-glasses and blazers and smoke.

This is the recipe for an unnerving show booed by some and slated by one critic (who still loved it) as ‘nasty and gratuitous’. ENO is ambitiously setting out its stall as ‘the premier opera house for Britten’ in this new production by Christopher Alden of Britten’s A midsummer night’s dream. Iestyn Davies sings the counter tenor role of Oberon created for Deller, Anna Christy is a sparkling Tytania, Graeme Danby is Snug and Willard White is in excellent form as Bottom. However, whether Bottom really needed a band called the Tops is just one more than dubious decision on view at the show we saw last night. 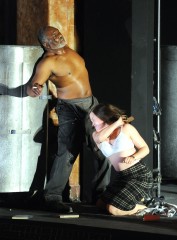 The opera opens with warping, downwardly skidding glissandi and a chorus of boys. Britten brilliantly used different themes, chords and instrumentation – including a harp and celeste for Oberon – to delineate the mortals from the fairies. The 1967 Deller recording conducted by Britten establishes a bright and magical mood. His fairies are wicked, but not evil. At ENO a sustained evocation of grimness and corruption drained the first two acts of almost any hint of enchantment. The cast all moved like sleep-walkers and their dreams were far from pleasant.

In spite of the broodingly sinister treatment of the first half and the essay on paedophilia in the programme, Britten’s notorious pre-occupation with boys was chaste and connected with his own childlike psyche, not with corruption. In this production Oberon chain-smoked and chalked lessons in ‘amo, amas, amamus’ before leading his boy victim off to be initiated. The set was based on a photo of a Victorian board school, complete with a large sign over the central doorway advertising ‘BOYS’. Although Britten intended Theseus to be absent from the stage until the end, in Alden's interpretation he drifted about puzzlingly.

But for my promise that the best was yet to come we would have left at the interval. The best music and set pieces are certainly in Act 3, which played to 55 minutes after 100 minutes before the interval. In the mechanicals’ Pyramus and Thisby, Britten skilfully parodies a Donizetti mad scene. At the Coliseum the set was transformed, the players flashed and fellated and the immortals looked on from their box. The lovers’ quartet, with its interweaving rising themes, was delightful. Thankfully forgotten was the adolescent coupling by the school bins we'd seen earlier. All musically was very well indeed – but as troubled Theseus hovered, Alden’s intention was evidently to spook us still.